A World Premiere by BRUCE GRAHAM Directed by MATT PFEIFFER On the Arcadia Stage January 14 – March 6, 2016

New York City, 1959. An aging vaudevillian comic, grasping to remain relevant in the ever-changing world of “show biz,” tries to revive his career with a starring turn in an avant-garde off-Broadway play. Meanwhile, his daughter struggles to uncover truths from her childhood that her father would rather keep hidden. From Philadelphia playwright Bruce Graham, author of three previous Arden works including the seven-time Barrymore Award-winning Something Intangible (2009), comes a new play about a man whose legacy is on the line and for whom comedy is serious business.

"Bruce Graham is the area's most prolific and successful playwright, and is having a whirlwind season."
–Mark Cofta, Broad Street Review

I fall in love with my characters. I can’t help it.  It’s what happens when you spend hours obsessing over someone. I open my eyes in the morning and I think: why does she do that? On my walk to the coffee shop I think: what does she really want? I’m in the grocery store and instead of choosing which kind of canned bean I should buy for my chili, I’m wondering what kind of music my character listens to when she is alone. Her actions are printed on the page; the words she uses are already written down. They’re out of my control. It’s my job to wonder why. The parallel to a potential partner’s inscrutable actions is remarkable. I suppose that’s what falling in love is anyway: an intense, focused curiosity about another human being. Over the past few months, I have been getting to know my character in Funnyman, Katharine Sherman. I love her. Katharine is wry, self-sufficient, and she prides herself on being ruled by logic rather than emotions. She values her own intelligence and is passionately interested in the world and the people around her. She likes to read plays in French. She is also, in the context of the play, the lone woman in a world of men.
Obsession is only a part of the process. Another very satisfying part of being an actor is making choices about who our character will be. Plays with only one female perspective are tricky. I’ve never actually done one before, which is rare for an actress. My last play was The Children’s Hour and before that I helped make an all female Film-Noir play for the Fringe Festival. Knowing that I’d be the only woman in the rehearsal room, particularly after a flurry of female-centric environments, was a somewhat intimidating prospect. It led to questions that I’ve never had to ask. In the second scene of Funnyman, the audience meets Katharine. She has just gotten a new job in New York City working as an archivist in the basement of Carnegie Hall. As she busily sorts through old music scores, a young male co-worker, Nathan, pokes his head in and does his best to flirt with her. The scene is wonderfully written. Katharine is surrounded by a great deal of work, and responds curtly to Nathan’s advances. It’s fun to play. Early on in the rehearsal process my approach was to almost completely ignore Nathan; I wanted Katharine to be genuinely more interested in her work than the man flirting with her. As we went through the scene, our director Matt Pfeiffer encouraged me to pay a bit more attention to him, suggesting that perhaps Katharine was more intrigued by Nathan than I initially thought. As we debated about about whether she should allow herself to become distracted by his advances, this idea of “likeability” entered my mind. My instinct was to play Katharine’s tough exterior. I wanted her to possess a genuine disinterest in the romantic side of things, especially in the beginning of the play, but in my conversations with Matt I began to wonder: if Katharine is cold to a likeable co-worker, how will that affect how the audience sees her? This thought nagged at me, and like a virus, began to spread to every aspect of the show. Should I show how much her feelings are hurt? Should I try to deliver this nicely? These kinds of questions had never haunted me as an actor before, but knowing that there were no other female characters in the play sparked a sense of obligation to make sure she represented all women, and that she represented them well. I wanted the audience to like her. I wanted them to see her side of the story. Any theater maker will tell you that this is a poisonous idea; “Being true to yourself” (or your character) is of the upmost importance, and in theater, as well as life, this cliché rings true. It doesn’t matter what anyone thinks of you, so long as you are doing what you believe is right; But inside of such a distilled world, I wasn’t able to shake the sense that I should craft a Katharine that people would like. This quixotic agenda came to a head during previews, in a scene where Katharine gets into a fight with Nathan.
KATHARINE … a husband could just sign a piece of paper- bribe some quack to go along with it and bang- his wife’s locked up in a straightjacket.   NATHAN The good old days—   KATHARINE It’s not funny! Jesus, Nathan, this is my mother!
During the first public performance, the audience laughed at the joke in Nathan’s line and as I yelled at him afterwards, I felt as though I was rebuking the audience as well. When we went over the performance with Matt afterwards, I brought up how uncomfortable that moment made me, and the whole cast looked at me like I was crazy.
“Emilie,” they said, “they’re laughing at how inappropriate that joke is.” Our assistant director Dan O’Neil even told me that he overheard an audience member whisper “Jeez, that’s her mother” in the pause between our lines. I was stunned. I couldn’t believe how out of touch I was with the audience’s experience. I was so distracted by the conundrum of being the only woman that I lost touch with what was really going on in that moment. On my walk home that night, I went over the play in my head. I realized that I had made choices, throughout the entire play, that were based solely on a desire to protect Katharine, to make her a “nice” person. And as a result, I was getting in the way of my character becoming a fully realized human. I also went through the performances of the male characters and remembered moments when they were angry, when they made mistakes, and when they were cruel.  Most of all, I marveled at how far I had went down a path which was exactly the opposite of how I had initially wanted to approach the character. Throughout the process, our director Matt had encouraged me to play Katharine a bit sharper here, a bit colder there, and my conflicted feelings on representing “all women” had gotten in the way of hearing him.
Now, I enjoy that argument with Nathan. And whether the audience laughs with Nathan or at him, Katharine’s experience doesn’t change. She is angry, as she should be, at the difficult task of navigating the masculine world of 1959. I think that Bruce Graham also falls in love with his characters. If you look at each character’s arc in Funnyman, you can see that every one of them are complicated, messy, and interesting people. Graham has written Katharine to be a powerful driving force; a woman who is both passionately interested in the past, and entirely unsentimental. She is complicated. We are all complicated. I wish that I had learned my lessons sooner. I wish that I hadn’t felt the need to soften Katharine’s intensity. I am complicated. And as I step onto the stage again tonight, I will relish walking in the shoes of my bright, hard-edged, unfettered Katharine.  Stagebill: 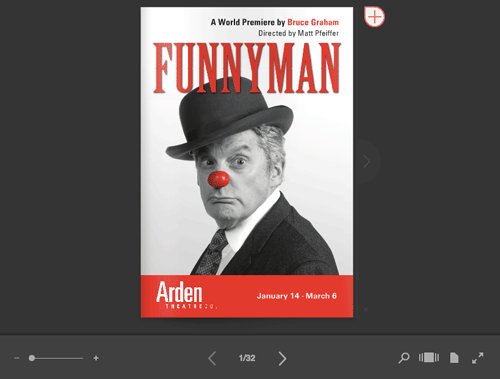 “This show has moments of humor and moments of hardship, and…will keep audiences engaged until the end of the production.” -Theatre Sensation [Read More]

“Bruce Graham has done it again!” “..a well-crafted, exquisitely subtle smash hit!” “There is nothing about this production that doesn’t work.” -Beyond My Backyard [Read More]

"...well-balanced direction by Matt Pfeiffer and sensitive characterizations by a top-notch cast" "Kenny Morris is superb as Chick’s long-suffering and ever-supportive agent Milt (Junior) Karp, who epitomizes old New York but recognizes the need to adapt to current fashions." "Keith Conallen is a riot as playwright Victor La Plant." "It all adds up to another stellar work by Graham and the Arden!" -Phindie [Read More]

“…a well-made play.” “(The Arden) has a gem in Wallnau. Another gem is Krause, who holds her own as a fiery and fiercely independent woman in a man's world.” -The Philadelphia Inquirer "...that's what makes Funnyman soar: not the historical references, not the clever invention of Chick's career highlights (like his trademark "Wowza!"), not even the wise commentary about how comedy has changed post-World War II — but the personal growth of all Graham's characters." -Broad Street Review [ Read More ]

"Wallnau is superb as Chick, and Pfeiffer has built something grand from Graham’s script." “Funnyman is never a cliché or another of a generic kind. It’s a deep portrait of a man who has reasons for wanting to be flawless on stage and even more poignant reasons for shunning the world and its demands when the lights go down and the makeup comes off." “Funnyman doesn’t wow. It does better than that. It impresses. It entertains while giving you a story and characters to think about." "The success of Funnyman is shared by its splendid cast" -NealsPaper [Read More]

Bruce Graham on his new play 'Funnyman', stand up comedy and the legacy of burlesque - WHYY [Listen or Read More]

"Bruce Graham is the area's most prolific and successful playwright, and is having a whirlwind season." - Broad Street Review [Read More]