“Shagspeare,” a playwright in London in 1605, (yep, that’s the one) receives a royal commission to write a historical play about a treasonous act. But the government’s side of the story just isn’t adding up. Now Shag must navigate the dangerous politics between writing a lie (and losing his soul), or writing the truth (and losing his head!). Hailed as the “must see show of the season,” Equivocation is full of witty allusions to some of the Bard’s greatest works, and is a smart, contemporary and bold new look at our greatest playwright ever. Running Time: 2 hours and 30 minutes, plus one 15 minute intermission. This production includes the use of special effects. Contains nudity. 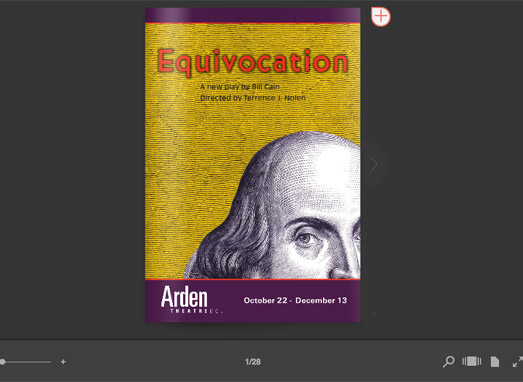 “….[a] rich, satisfying work.” “…all elements connect in a fascinating, funny and terrifying world of intrigue and intellectual entrapment.” “[Equivocation]…juggles big ideas and deftly keeps them in the air.” -The Philadelphia Inquirer [Read More]

“Equivocation at the Arden Theatre, under the direction of Terrence J. Nolen, is a beautifully crafted production with performances by a group of incredibly talented actors.” “ a wonderfully staged production with solid performances.” “ a witty, entertaining and thought provoking production.” -Theatre Sensation [Read More]

“…a clever work of historical fiction.” “The cast of six plays the acting troop (as themselves and as various famous Shakespearean characters) as well as the principles of the Gunpowder Plot. The effect is excellent and, under Terrence Nolen's direction, the double and triple casting adds a layer of tension and drama to the play without ever becoming confusing.” “If you love history or Shakespeare Equivocation is well worth your time.” - Talkin’ Broadway [Read More]

“Equivocation, Bill Cain’s alternative history about William Shakespeare getting caught up in deadly royal court intrigue, is exceedingly clever and almost dizzyingly erudite.” “…some quite funny moments.” Or just “…quite funny!” “Cain’s play is marked by its scholarship and witty commentary” “…Nolen keeps the play moving quickly and also keeps the action clear at all times.” - DC Metro Theatre Arts [Read More]

“…word play at its finest!” “Wit and wisdom are paired as the essence of family, faith and truth are explored in this fascinating fictional historical setting.” “…vibrant, impressively tight, and beautifully staged.” “…there is so much to see and to think about in this show; great comedic moments, conflict and contemporary parallels, and such excellence upon the stage, that it continues to echo afterwards.” - Delaware County News Network [Read More]

We are proud to announce that Equivocation is Barrymore Recommended.