Based on the MYTHS OF OVID Written and originally directed by MARY ZIMMERMAN Directed by DOUG HARA On the F. Otto Stage October 1 – November 1, 2015

From acclaimed playwright Mary Zimmerman (of Chicago’s Lookingglass Theatre) comes this dazzling adaptation of Ovid’s classic myths. A rippling, onstage pool conjures a magical world where Gods and mortals co-exist and universal tales of fate, lost love, greed and death are shared. Tony Award-nominated for Best Play, Metamorphoses overflows with gorgeous imagery and visionary theatricality. This is storytelling at its finest. Running Time: 1 hour and 40 minutes with no intermission. Contains nudity. 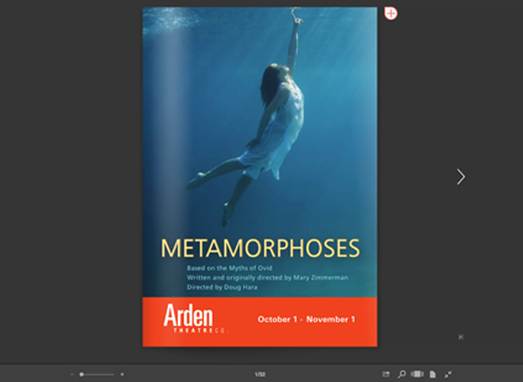 “Arden Theatre's spectacular production, under the imaginative direction of Doug Hara, dives—literally—into their new season…” “The cast both enacts and narrates the stories, and they are, one and all, charming and graceful and sensual, and often funny.” “It is dazzling and fun and mystifying to see so much stagecraft in action.” "The production is a knockout.” - The Philadelphia Inquirer [Read More] “Clever, sometimes haunting and often beautiful.” “Spellbinding!” “A visually arresting production.” - Newsworks [Read More] “Scenic designer Brian Sidney Bembridge’s 18-by-24-foot pool creates a fascinating aesthetic” - Phindie [Read More] “Excellent, compelling production!” - Delco News Network [Read More] “Arden’s production of Mary Zimmerman’s stunningly visual play is as beautiful and accomplished as anyone could hope for.” “Director Doug Hara’s production is masterfully realized on every level.” “The entire cast is terrific, the design work spectacular.” “The Arden’s Metamorphoses is not only gorgeous – it’s an exhilarating example of the craft of theatre at its most virtuosic.” - Reclining Standards - David Anthony Fox [Read More] “Watching Metamorphoses is a sensory experience.” “Mary Zimmerman’s play retells ancient myths with intelligence and invention, and that alone makes it memorable.” “What you’ll remember most about the show is its use of water, and the way you’ll feel immersed in it, even if you don’t get a drop on you.” - DC Metro Theater Arts [Read More] "In these thrilling moments our oldest myths come to life as visceral shared experiences. This is the power of Metamorphoses, portraying archetypal characters and mythic stories that are literally thousands of years old in a way that is relevant, moving, and personal." "At its best, Hara's production is visually stunning, intellectually challenging, and emotionally gut wrenching." - Talkin' Broadway [Read More]

We are proud to announce that Metamorphoses is Barrymore Recommended.