By Aaron Posner, sort of adapted from The Seagull by Anton Chekhov With original songs by James Sugg Directed by Aaron Posner On the F. Otto Haas Stage September 15 – October 16, 2016

In this irreverent, contemporary, and very funny remix of The Seagull, Arden co-founder Aaron Posner scoops up Chekhov’s tale of unrequited love, missed opportunities, and misplaced dreams and sets it down squarely in the bustle of 21st century life. This new play has been showered with awards and critical acclaim and is one of the most produced plays in the country – now it comes to Philadelphia. Runtime: 2 hours and 20 minutes, with one intermission. Contains strong language. Contains brief nudity. 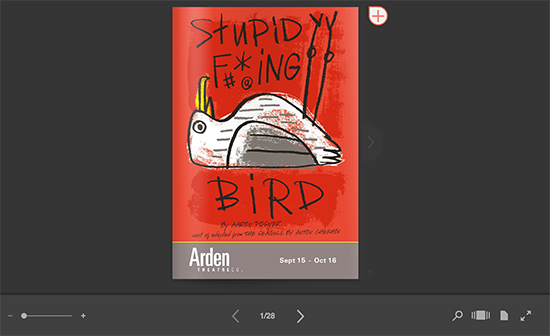 “In Aaron Posner's exquisitely clever adaptation of the play – in a production at Arden Theatre Company that can't be beat – you get the laughs, too. Lots of them." "It's often laughable out loud – yet Posner's play is also sweet, whiny, intense in the extreme." "It brings "The Seagull" into modern fine tuning – you could say that it takes a great work and resizes it with lots of additional pixels. It doesn't venture far from the basic "Seagull" plot – and if you don't know or remember much about the play, you can enjoy "Stupid F#*@ing Bird" as a fully evolved piece "Misery has never been, in my experience, so attractive while still being miserable. Some reasons this play works so well as a production at the Arden: Posner directed it himself, obviously knowing just he wanted "Stupid F#*@ing Bird" to be. And he assembled a cast that makes each role shine: "All seven actors excel in their distinguishing miseries, which they sometimes debunk even as they play them out." "As for the audience's mental condition, woe has never been so pleasant." - Newsworks Read more here

“The bird may be stupid, but this is one smart play." "Brilliant show with a dream cast." - Toby Zinman, Talkin Broadway Read more here

“Anton Chekhov's The Seagull explores the complexity of human relationships, especially the cruelty of love, while simultaneously delving into the nature of theater itself." "Smart and insightful without being pretentious, Stupid Fucking Bird is a fun, intelligent, occasionally self-deprecating, and frequently dark work of art." "Fast paced, funny, casually insightful, and periodically profound" "Even if you have never seen The Seagull or pondered the meaning of performance art, Stupid Fucking Bird will captivate you with its unexpected insights into the human capacity for love, misery, and creative self expression. If you are a lover of Chekhov or a student of the theater it just might blow you away." - Talkin Broadway Read more here

“Posner’s work is brilliant." - Beyond My Backyard Read more here

“It’s hard to image a more persuasive production that this one, elegantly directed by Posner himself, and featuring a terrific ensemble of seven actors." "In all, I recommend Stupid Fucking Bird wholeheartedly." - Philadelphia Magazine Read more here

"This play at the Arden is one show that you do not want to miss this fall." - Theatre Sensation Read more here

"I know Chekhov is smiling with approval about Posner’s adaptation." "What a joy it is to see such a thoughtful play that is so entertaining and engaging. " - Main Line Media News Read more here

"SFB, personal and funny, has an honesty that breaks through." "At Philadelphia's Arden Theatre this show is very special. Aaron Posner co-founded this theater with Terrence Nolen back in '88, and Posner, an accomplished director, has finally directed a production himself." "Seven well-cast and sublimely grounded actors inhabit two simultaneous realities and take the challenges of this complex work in their stride." - Curtain Up Read more here

Arden Theatre's cofounder returns with kind-of Chekhovian 'Bird' (Posner) has a taste for redoing the classics, but (Stupid Fucking) Bird is a jumbled, highly personalized rewrite of Chekhov. It became a way for Posner to look at events in his own life (the birth of a daughter) and his surroundings (politics, his life as an artist) and spin Seagull into autobiography. (Producing Artistic Director Terrence J.) Nolen says he was " struck by his old friend's deconstructionist view, one that captures Chekhov brilliantly, but is very much a new Posner work." "The truth is the point of theater," Posner says. "As a director, I've forever asked actors to look into their hearts and minds and put their truth on the line: to reach deep, be generous and courageous. After a generation of asking that, I owe that of myself." Since its first performance in May 2013 by the Woolly Mammoth Theatre Company in Washington, Bird has flown around the globe to great applause. It won the Charles MacArthur Award for New Play or Musical in 2014. - The Philadelphia Inquirer Read more here

We are proud to announce that Stupid Fucking Bird is Barrymore Recommended. 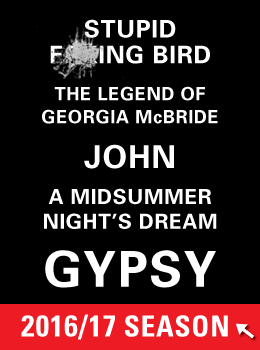